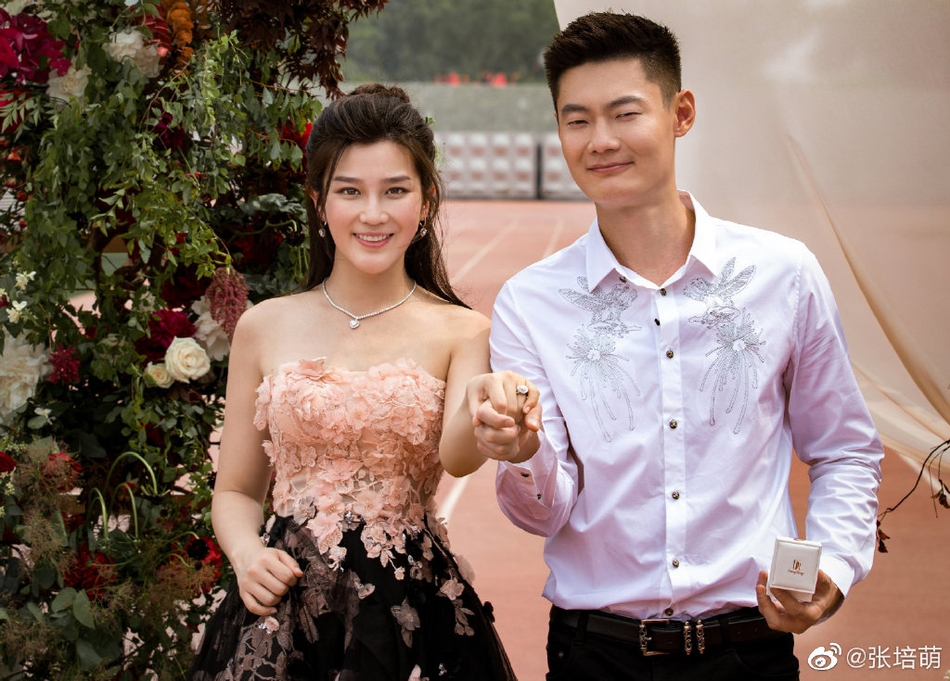 On the evening of October 15, Zhang Mohan, the wife of former Chinese track and field sprinter Zhang Peimeng, published a thousand-character essay complaining about the whole story of Zhang Peimeng’s domestic violence, and said that he had formally filed a divorce lawsuit and was waiting for the trial. The original text is as follows:

I'm sorry to use this way to talk about my family affairs.

My marriage with Mr. @张培萌 has gone through many domestic violence, derailment and irreconcilable conflicts, and it can no longer survive. At present, I have formally filed a divorce lawsuit to @张培萌 and wait for the hearing. Of course, if things go well, this Weibo may not exist.

Regarding domestic violence, first of all, I admit that I did a very poor demonstration. He apologized very sincerely after every domestic violence, and I also chose to forgive. It is these tolerance and forgiveness that allowed me to experience domestic violence throughout my life before and after marriage, including pregnancy, confinement and lactation. Many times I did not choose to report to the police. Of course, I have been confiscated several times with my mobile phone and kept at home and not allowed to contact the outside world after being domestically abused. Even so, I have reported 3 times in just two years of getting along. And 1 experience of going to police for injury inspection.

But since I am still breastfeeding and the community is closed and there is nowhere to go during the epidemic, I choose to bear it for the sake of my children. I once asked him "Why do you treat me like this?" He answered "Athletes are like this, and male hormones are high."

I need to explain the fact that Mr. Zhang Peimeng’s domestic violence against me did not cause serious eye-irritating wounds, only a disagreement, or slapped my mouth, choked my neck, grabbed my hair and hit the wall. Kick me with your foot or grab my arm and push me to the ground. I only have uninterrupted bruises, and he does have a sense of measure in this regard.

The reason why I chose not to bear it any longer was that I found out that he had an extramarital relationship with the opposite sex. I saw that the opposite sex called him affectionately on WeChat and told him to avoid his wife’s late night meeting. Of course, there are some restrictions Video. Apart from what I saw with my own eyes and the contact information of individual women, I really have no other evidence for this part of the facts. At that time, I tried to steal his mobile phone. This behavior finally ended when I suffered domestic violence again and called the police.

But divorce is far easier than I thought!

On July 1, 2020, I received a divorce agreement from Zhang Peimeng. As the law stipulates that the man cannot file for a divorce within one year after the woman gave birth, I was both aggrieved and surprised. When I used forbearance to maintain the family, Zhang Peimeng prepared for the divorce early when the child was only 9 months old.

On July 17, 2020, after being confiscated by Zhang Peimeng, I chose to take my children back to my hometown in Harbin to officially start my separation and coordinate the divorce agreement remotely. (At that time, the child was only 10 months old and was still breastfeeding. According to the law, if the divorce is to be sentenced to the mother, I took the child away after separation.

On July 21, 2020, due to our huge differences over custody rights, I formally applied to the court for divorce.

From July 24, 2020, Zhang Peimeng never answered my call or responded to WeChat (including the news that my daughter needs an operation, I want to discuss with him)

On the afternoon of August 24, 2020, this is the most unacceptable thing for me! Zhang Peimeng took a few men to ambush in the corridor of my house for several hours (one of them had been watching downstairs of my house several days in advance after investigation). While I was not at home, when my mother and auntie took the keys to open the door, they took them from behind. An old man knocked down and rushed into the house, snatched the child from the arms of his parent-in-law, and beat the two old people in the process. Obviously, this was a planned illegal entry and violence. After the incident, we reported to the police as soon as possible. The result of the case is still waiting. I believe the police will deal with it fairly and fairly.

It’s been 52 days since my daughter was taken away from me. I miss her very much. She hasn’t left me for so long since she was born. I don’t know if she was scared without me by my side. I always gave it to her. Doing supplementary food, does her stomach still adjust to someone else? Who is accompanying her... I tried to go to see the children at home in Beijing, but learned that the property and security had obtained my photos, and was told not to let my people and cars Entering the community, I can’t understand and accept that our marriage is still in existence. I am the mother of the child, why not let me see the child? I didn't even see her on the child's first birthday.

Since the incident so far, my silence and tolerance have not brought any good effects and results, but have hurt my family and live in panic every day, so I have this content that I don’t want to endure anymore. .

As a woman, I want to end this marriage and end this life.

As a mother, I hope that my daughter can stay away from the environment of "violence" and "temper temper" and live with me.

As a daughter, I cannot accept that my mother and family members are beaten into the room for unknown reasons. I live in panic and anxiety every day. I believe that the fairness of the law also waits for the other party to be punished.

Finally, I am only myself, I want to use the above content to alert all women-do not compromise in the face of domestic violence, leaving is to love yourself!

Many friends have advised me, "You are still young, you should give up custody and keep your career." After all, I work in front of the stage and it is not a good thing to fall into such a public dispute. But for me, no career or dream is as important as my daughter's future healthy growth.

"Daughter, it was my mother who almost took her own life to bring you into this world more than a year ago. My mother will be responsible for you. Hope to return!"

Since August this year, Zhang Mohan complained of "Scumbag" on Weibo. Although she did not name him, her replies to netizens and various signs indicate that Zhang Mohan is referring to Zhang Peimeng.