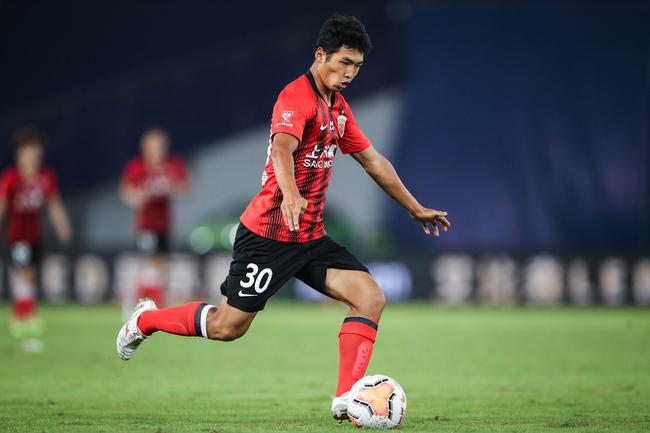 With the local new crown epidemic basically under control, the restart of the Chinese Professional Football League this season can be regarded as quite smooth and successful. Today, the Chinese Super League is about to start the second stage of the battle between the championship and relegation groups, and the first stage of the Chinese League is nearing its end.

It is worth noting that in this year's Super League and the Chinese Premier League, there are more SIPG youth athletes. For example, Wei Zhen and Chen Binbin, who have stable playing time in SIPG; Hu Jinghang, who has scored three goals and loaned to Wuhan Zall; 16-year-old Jia Boyan, who has set the record for the youngest appearance in the Shanghai SIPG; Shi Xiaodong, Wei Lai, Huang Zhenfei, Li Shenyuan...

Only with accumulation of competition can we mature

In the first stage of the Chinese Super League, the U 23 player with the most appearances and the longest time for SIPG was central defender Wei Zhen. In the 14 rounds, Wei Zhen played 11 games and was a member of the starting lineup 8 times. He averaged 73 minutes per game. He became the first U23 player of coach Pereira in the formation. .

Being able to hand over such an important position as the main central defender to the U 23 players, among the 16 teams in the Super League this season, with Shanghai Greenland Shenhua’s Zhu Chenjie faded out of the starting list, now only Shanghai SIPG and Chongqing Dangdai (U 23 Zhongwei Yang Shuai).

With enough accumulation of competitions, Wei Zhen's performance has become more and more mature. Especially in the past most of the time he could only get the chance to play when the team adopted the three-back system. Now he has been the starting center-back in the four-back system. This change started in the team's first cycle and Beijing Guoan's second half. Since then, in addition to the final round of the team because they have already made a big rotation in advance, Wei Zhen has started 6 out of 7 games. He is one of the team's two main central defenders and played 5 times.

Another U23 player of SIPG, Chen Binbin, played 10 times, from the left wing, to the left wing back, the left back to the right wing, and he also got ample training.

Wei Zhen and Chen Binbin’s teammates Hu Jinghang, who were on the National Games champion team, were loaned to the Chinese Super League Wuhan Zall this season. He also got more opportunities to regain the feeling and state of the "Best Rookie in the Super League" three years ago. In the first stage, he scored 3 goals for the team with 9 appearances and 7 starts, which has tied his league's single-season scoring record.

These players who will no longer enjoy the U23 policy next year or the year after, what is most needed at present is to accumulate enough games to mature as soon as possible, so as to cope with the more brutal competition in the future.

is also taking into account the young players who want to serve the club, especially those players who are not in the first team plan for the time being, can have the opportunity to play, continue to improve themselves and maintain their form. Before the start of the new season, SIPG has officially announced the rent of 10 U23 players to other teams to level up.

Except for Hu Jinghang, who is loaned to Wuhan Zall, the remaining young players are loaned to the Chinese clubs that are more likely to get games.

Judging from the first stage of the Chinese Premier League, the hired players of SIPG have indeed got real opportunities for training.

Goalkeeper Shi Xiaodong directly became the main force of Nantong Zhiyun. Before encountering the super hot Changchun Yatai, the 22-year-old goalkeeper who had just ushered in his first professional game a month ago only conceded 3 goals in the first 7 games. The 0:4 loss to Changchun Yatai was also an exercise for Shi Xiaodong.

Like Shi Xiaodong, the main force in Nantong Zhiyun is also the starting left-back Wei Lai. Another midfielder from SIPG, Zhang Huachen, also played 7 times in 9 rounds and started 5 times.

Although Inner Mongolia Zhongyou is at the bottom of the group, the forward Huang Zhenfei on loan from SIPG, the midfielder Zhou Zheng, and right back Li Shenyuan are basically part of the team's main lineup. Central defender Zhu Jiayi has also started 4 times. Among them, the 21-year-old Huang Zhenfei also ushered in the first goal of his career in the Chinese Premier League. It was Li Shenyuan who was loaned to the team from SIPG to assist him.

Although most of SIPG’s rented players are in the second-tier leagues, compared to the previous leagues that lacked attention and competition, the level of China League One is definitely higher, and the value of exercise is also higher. Bigger.

For young players, of course, the more games they can play, the better. Such renting also gives them a stage to show their abilities and potential. Those who perform well may be promoted to SIPG's first team in the future; even if there is no chance in SIPG Club, they can lay a good foundation for the future.

broaden the horizons of younger players

Speaking of SIPG's young players competing in this year's professional league, Jia Boyan, who has created the club's youngest appearance record in the Super League, of course cannot fail to mention.

A year ago, Jia Boyan was just a youth player of SIPG U16. Born on November 30, 2003, he played as a substitute in the 8th round of the first period in the game between SIPG and Tianjin TEDA. On the day of the game, Jia Boyan was 16 years and 275 days old, ranking third in the history of the Super League, and is also the youngest player among the 16 teams in the first stage of the Super League this year.

From the perspective of lineup and tactics, players like Jia Boyan with age and qualifications are not necessary for SIPG's first team; but from the perspective of young player growth, let Jia Boyan, who is only 16 years old, train with the first team and compete in the Super League together. It's an experience on the field, and the meaning is different.

"The head coach didn't tell me before the game that he would let me play. I have been on the roster in the previous games. I thought about the chances, so I was always ready. When I was really asked to play, I was very nervous. Yes, it’s a bit embarrassing.” Although there are only a dozen minutes of playing time, it is already a very valuable gain in Jia Boyan’s view. “The net time is about five to six minutes. I suddenly played and I didn’t have time to adapt. Later I watched it. The playback of the game, I feel that I am still far from the others on the court. The pace of the game is really fast, which is very difficult for me; but it also broadens my vision a lot, which is completely different from sitting on the court. "

From the youth echelon to the first team, in Jia Boyan's words, the difficulty increases all at once. There are many areas to adapt, including the intensity of confrontation and fast pace in training.

Of course, even if the first team has very few opportunities to actually play on the field, training alone is enough for Jia Boyan to learn a lot. "Step into the world of the adult team early and see a higher level of football. Learn how top players play. , It is also very convenient to ask for advice. The foreign aid and the big brothers in the team treat me very well, trust me in training, are also very tolerant and willing to help me. When I make mistakes, everyone is more encouraging me , I am really grateful to them. I am also grateful to the head coach for giving me the opportunity to train and play in the first team, and to feel different things."

As for the pressure that comes after becoming the focus of attention of the outside world, Jia Boyan said that he actually doesn’t feel any pressure. “I don’t pay much attention to these things. Lost yourself by the words of others."

As the Chinese Super League enters the second stage of the championship competition, Jia Boyan also knows that the most important thing at this stage is to work harder and harder in training. "It is really difficult to get a chance to play again. I will take daily training seriously. If you have a chance, you will definitely work hard, and you will not be discouraged if you have no chance."